It's time to get into the Halloween and Fall spirit!  I hope you enjoy this week long series, Mama Makes Halloween Edition.

I'd like to introduce you to Melissa from While It Rains. She is a mama of 3 girls and soon she will have her first baby boy!  Today she is going to show you how to make Spider Pumpkins. 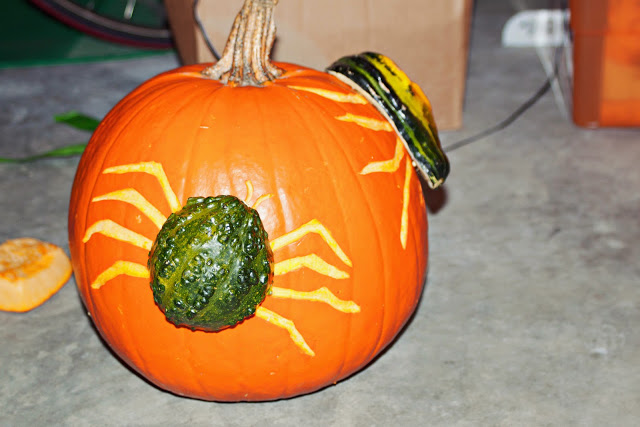 carving pumpkins isn't my favorite thing in the whole world, sorry. i always want to pick a way to complicated stencil and eventually pass it off on my husband when i have broken one too many toothpicks and my halloween spirit is dampened.


since i have become a parent i try to find new fun ideas to do instead, something outside of the knife and big orange scoop, box. whether this means painting them, or melting crayons on them, or doing some sort of ombre effect - i want our pumpkins to be different.
this was one of my favorites to date, the spider pumpkins. this diy was born after my dad talked us into making his entry for a contest he was entering at work last year, we didn't have anything better to do so we obliged.
good ole' martha is to thank for this idea and her awesome carving tips to add a little something to your work. who knew a linoleum cutter was the go-to pumpkin carving tool this year? with her carve by color technique you basically do a lot more scraping then cutting and you ditch those $5.99 target tools and hit up lowes for the necessities. even though we totally bought the wrong looking but with the right name tool, it still worked fine for us. she suggests a lot of other crazy tools that we didn't need for our project. tim and i teamed up on this, i did the cleaning out of the pumpkin and the drawing of the legs and tim sawed the gourds in half, while two toddlers climbed all over him. the pumpkin we had was weird though, so stringy and hard to get a clean surface inside. we went with an opening in the bottom since we are going to light with a short string of white christmas lights wrapped around a jar - it gives the top a much better look. we never cut all the way through on the spiders, we used the linoleum scraper to saw down superficially then to scrape off the skin till it was a depth we liked it. on the second one tim went even shallower so that the light was different on it, it turned out so cool! it really was an easy technique to pick up even though the website doesn't give much instruction. we ended up doing three spiders, adding the third non-gourd one at the last minute to give it more depth. we attached the spiders with a mix of toothpicks and gorilla glue, because my husband is nuts and loves any project he can involve gorilla glue in. we were pretty proud of the end result and even though we only won second place it was worth getting to have this cool pumpkin on our porch last year. i keep thinking it would have looked so cool with some fake spider webs all over it! 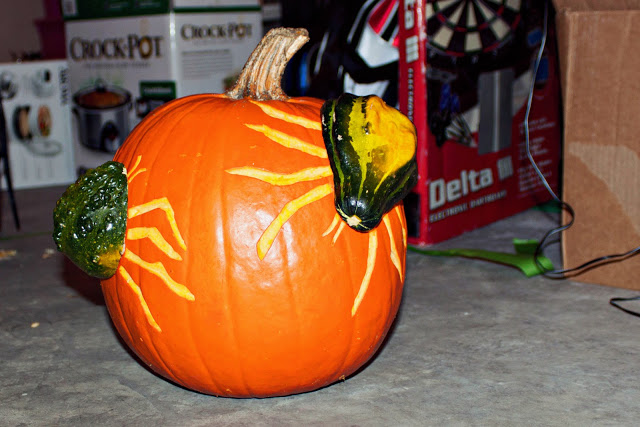 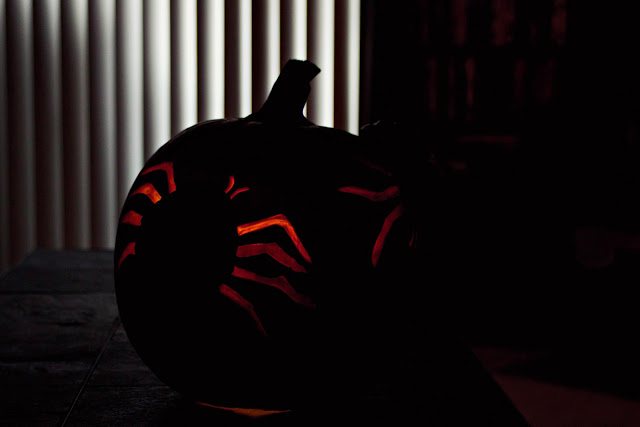 Thank you so much Melissa!

If you leave a comment via your phone, it won't show up because I use Disqus.
I promise I didn't delete it! Thanks. :) 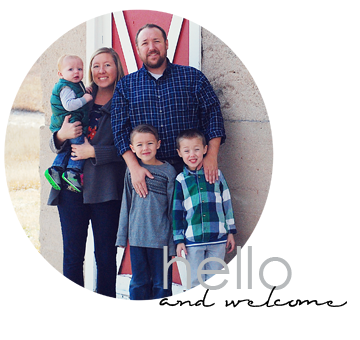